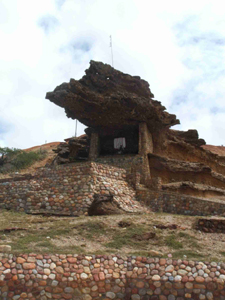 The Shrine at San Pedro on Isla Coche
22-23 February 2008 Isla Coche We had a quiet enough night at anchor, but there were occasional squalls of 25 knots and more. This only really mattered when we tried to row ashore, right into the wind, and got soaked. On the first day we just mooched about the beach, but on Saturday we took a tour of the island.

The first stop was the salt pan, but then we went on to the village of San Pedro where there is a shine housed in and extraordinary rock formation; a breccia with a hard matrix extends 15-20 feet from the top of a small cliff. The shrine is housed underneath the overhang.

We were then driven to a viewpoint above the shoreline, from where we had a splendid view of the north Venezuelan coast, albeit a misty one. The island proved to be very arid, and the vegetation consisted mostly of cacti and other succulents, the bare, red earth showing between the plants. The soil was covered with small rocks and pebbles.

Our last stop was at the east end of an enclosed lagoon called El Saco. Although this is one of Coche's recommended anchorages, there were no yachts in there; perhaps the continuing reminders about safety and security were making yachties slightly paranoid! At the eastern end of the lagoon were enormous piles of shells - clams, cockles, conchs - acres of them. Unfortunately my Spanish wasn't good enough to understand the explanation. More... 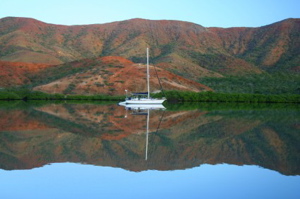 Dream Chaser in Laguna Grande del Obispo
Our first stop was in El Oculto, which means, "hidden bay". This is a large bay on the north coast of Venezuela and well protected from the ocean. It is surrounded by hills full of cactus, desert plants and a few flowering trees. You can see flocks of small green parrots in the mornings darting from tree to tree. In the bay, there are two small islands where the snorkeling is superb but the water is only 75 degrees making wetsuits a necessity! The coral is alive here where most of the coral in the Caribbean Islands is dead. The coral is covered with Christmas Tree Worms, which are cone shaped like a Christmas tree. They appear to be soft and fluffy, and are spiral in design when looking at them from the top - down. They range in colors from purple, peach, pink, white, and green, to white with a black spiral, blue with a tan spiral and more. If you wave your hand over them, they will pop back down in the coral-like tube they live in. It is quite an amazing site.

New Years Eve afternoon was spent with a large group of cruisers on the beach for a party in El Oculto. Ten cruising boats made the 4-hour trip east from Bahia Redonda Marina for the party. We used an old abandoned fishing camp for our party headquarters. The "camp" was set back from the beach and consisted of a 20' x 40' cement floor, with an old dilapidated corrugated roof and wire mesh sides for walls. We had not seen any fishermen using the camp since before Christmas when we were here. The decision was made to use this as our party base. We brought music on our MP3 player to shore that we powered by a portable battery and a small inverter. Others brought chairs, portable folding table, lanterns, grills and everyone had their own meat to grill and a dish to share. It was also Lucia's 5th birthday on New Years Day and this party doubled as her birthday party. We provided the dessert; cupcakes decorated with powdered sugar dog bone designs. The New Year was toasted to early with a huge bonfire just after dark. Only a few wild, younger souls made it to midnight. On New Years Day, the celebration continued with a Recovery Party onboard two cruising catamarans rafted together. We invited 2 Venezuelan couples to join us who were in the bay on their powerboat. They brought champagne and cooked traditional Venezuelan food to share with all of us. More...

Top
The Outer Islands of Venezuela - December 27, 2007
by Pat and Miriam
on board s/v Rhiannon 3 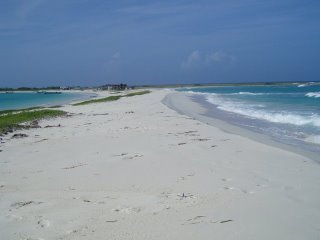 The Outer Islands of Venezuela
Venezuela is such an incredible country. We are so glad we came!!! So many cruisers are reluctant to come here because of the risk of piracy and crime but our experience has been wonderful! The Venezuelans that we have met are so genuinely friendly and considerate. It's unfortunate that the BAD guys are out there. But the local people are affected by the crime rate as well, even more than the average cruiser. The country is ripe with natural resources but the inflation rate was reported at 13% in October. We really hope that the government can turn things around. The caring people of Venezuela deserve nothing less.

As far as Sailors go, the cruising is excellent. More islands to explore than time would ever permit. So many uninhabited places & I have never seen so many beaches (except maybe in the Bahamas). If you want to explore inland, there is a vast and almost endless list of places to go and things to do. More...

Webmaster's note: Be sure to check out the other entries in Pat and Miriam's cruising blog, Angel Falls and Pictures October 2007 are wonderful!

Fundamigos team
Cruisers staying at Marina Bahia Redonda, Puerto La Cruz, Venezuela, volunteered their time and efforts last fall to the 16th annual Fundamigos medical mission for economically disadvantaged adults and children from the eastern part of the country. More than a dozen sailors helped raise money and prepare blankets and bandages to assist medical staff perform reconstructive surgery for 86 economically disadvantaged patients, including 55 children with cleft lip and palate repairs, at Dr. Luis Razetti University Hospital, Barcelona. When the surgery was finished, cruisers treated the visiting U.S. medical teams to some sun and fun aboad their boats at a nearby island.

Top
Puerto La Cruz, Venezuela:
An Option for Hurricane Season - July 2007
by Nancy Terrell
All At Sea Website
Having lived through 20 hurricane seasons in the Virgin Islands, both British and U.S., when the 2006 hurricane season arrived, Dave and I decided that we would head south. Following Hurricane Ivan in 2005, our insurance policy was changed to only cover our classic trawler, Swan Song, at a latitude below that of Grenada, so we looked at our options and decided, based upon what we had heard from other cruisers, that Puerto la Cruz (PLC) would be the perfect spot to sit out the season. It was a decision I will never regret-in fact, we enjoyed Venezuela so much that we are returning again this year. Never mind the politics-that if anything make Venezuela much safer for cruisers, in our opinion-we are headed back for some great Latino music, food and friends.

Located at latitude 10°13'N, 064°40'W, PLC is the perfect place to congregate and enjoy South America. There are many excellent marinas and boat yards there; we happened to choose Bahia Redonda Marina at the entrance of the extensive canal system known as El Morro that serves as a highway for cruisers in their dinghies. Our marina came with everything, including WiFi, for one third of the price we had been paying in the Virgins and you can shop, provision, and visit the medical community using the canal system. More...

Top
Los Testigos Islands - May 24, 2007
by Terry Baverstock and Christine Jarvis
on board s/v Teka Nova

s/v 'Teka Nova'
August 2006 Royal Clarence Marina Gosport
Los Testigos Islands were lovely, only 168 people live on the mainland. You first have to check in with the Coast Guard (friendly and helpful) before anchoring off the Islands. The snorkeling was particular good.

On one particular day we were both reading in the cockpit, when we noticed a fishing boat of medium size with 10 men onboard getting very close to us, we began to panic when they started throwing lines onto our boat. We then noticed that they had Teka Two (the dinghy) in tow. Teka Two had come untied and drifted out to sea, neither of us had noticed. The fishermen went and retrieved it and brought it back to us. If it had not been for the fishermen we would have quite wrongly thought Teka Two had been stolen. The fishermen well deserved the beers we were able to give them.

Los Testigos Islands are well worth a visit if you are sailing in the area.

If you are not sailors, sorry, its the only way to get there! There are no planes, no hotels, no shops etc. We stayed there for 4 days along with a German and a Dutch yacht and Fabio of "Amandla". More...