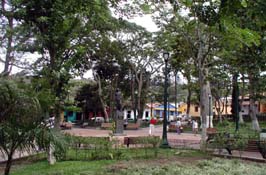 Plaza Bolivar, El Hatillo (town square)
Our friends advised us to get into PLC early, before the wind picked up so we could get into our slip easily. So the next morning, we left at around 9am and got to the Bahia Redonda Marina in PLC around 10am. The dockmaster met us in his skiff at the edge of the breakwater and showed us to our slip. He and some assistants then helped us into the Mediterranean mooring slip with no problems, tying our bow lines to the cleats on the floating dock and the stern lines to mooring balls just aft of our stern. We hooked up our power cord, water hose and were set. More...

Top
Landfall: Venezuela - September 2002
by The Hacking Family
on board s/v Ocelot 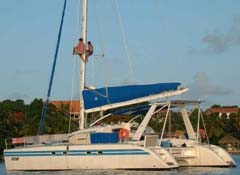 Ocelot, a Kronos-45 catamaran
Ah, the Spanish Main! We sailed to Venezuela in September 2002 and stayed about 4 months. We left from Grenada and, as it's about 90 miles, we did it as an overnight sail, our first with the kids. After a couple of squalls early in the evening, the crossing went well, with the wind well behind us and gentle swells rocking those off watch to sleep.

We first spent a few days off the island of Coche, playing in the water and lounging by the hotel pool with friends. There were several other cruisers with kids here, enough for amidnight soccer game on the beach. Then we went to Porlamar, on the island of Margarita, where we spent the majority of our time. Margarita is a duty free island, so there were lots of bargains to be had. We flew from there to Me´rida with 2 other boat families, and spent 2 glorious weeks in & around the Andes. Then Jon's brother visited with his family of 5 and we sailed around the Margarita area. We visited the Golfo de Cariaco, Laguna Grande, the Guacharo Caves, and Isla Blanquilla. After they left, we hauled Ocelot to paint the bottom and do other routine annual maintenance. Then we piled as much food on board as we could and headed out for the outlying island of Tortuga, and the archipelagoes of Los Roques and Las Aves, before heading off for Bonaire. More...

Top
It's the Ice Cream! - November 2002
by Reylyn Edwards
on board Tropical Dance 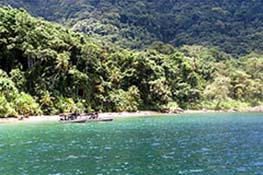 Ensenada de Mejillones
Peninsula de Paria, Venezuela
Then there's a really nice mall at one corner of the development that has tie ups for boats and dinghys, with a large supermaket to boot! But the Ice Cream parlors . .oh my God! Ice Cream like you've never tasted or SEEN before. They way they present the ice cream put hagan Daaz, Ben and Jerry's or any other high end ice cream in the states to shame. It's small, but boy do they do it right. They present the ice cream in metal sheet pans (instead of cardboard tubs) and dress it with some really delectible topping. It's the most beautiful ice cream I've ever seen. More... 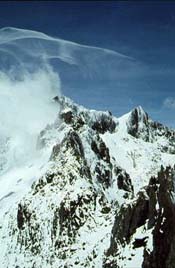 We had left Ironhorse in the marina in Puerto Cabello, Venezuela, three days before, and taken an 11-hour bus journey overnight, to Mérida, a university town 1,500 metres above sea level in the lower reaches of that great mountain range. After a day to acclimatize in this lovely old city, we organized ourselves for the objective of the exercise - to take the longest (8 miles) and highest cable car in the world to the top of the beautiful Venezuelan Andes.

With clear skies on a crisp January morning, we were transported gently upwards for 30 minutes in four stages to almost 5,000 metres, disembarking atop Pico Espejo (Mirror Peak), only a few hundred feet below the highest peak in Venezuela, Pico Bolivar, which then faced us. More... 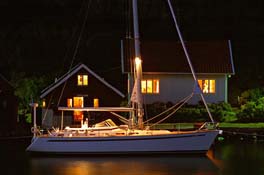 Najad 373
Preparing For the Off
On 28th July 2001, after what seemed like endless preparation, Najad 373 hull number 5 Galatea of Southampton set out from Falmouth for an 'Atlantic Circuit'. Having resigned from our jobs, rented the house and terminated our mobile phone contracts, the 'passage plan' we'd set for ourselves covered 15,000nm - heading as far south as Venezuela and as far west as the east coast of the USA. And we set ourselves a year to do it.

Having hopped down the island chain - St.Vincent & the Grenadines, Grenada and Tobago - Venezuela is within easy reach, and well worth the sail. Once the beaurocracy has been mastered and you've finally cleared in, this diverse part of the Caribbean is great to explore. The difference here is, that as a yachtsman, you're a little-seen visitor amongst the everyday goings on of a 'real country' rather than a source of income to an overgrown 'tourist island resort'. In the major ports provisioning is easy - and very cheap - and away from these the anchorages are superb... and charter boat free! This really is a place where you barter with the fishermen - a lobster for a can of coke - and where help doesn't always come with the demand for a fee.

Webmaster's note: Sorry, the link is no longer working.