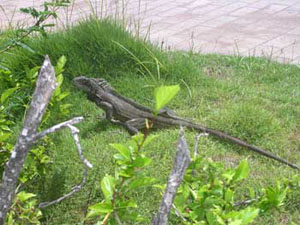 Iguana on Bahia Redonda grounds
Once the dock lines are secured, we don't miss a beat joining the social activities at the marina. Sunday afternoon is the weekly Mexican Train domino tournament, bringing in about 20 players. Monday night is the BBQ potluck. Every other week, a free bus takes boaters to a shopping destination. We take the bus to Makro, a Sam's-style warehouse with a wide variety of consumer products and food. We also explore outside the marina. A modern shopping mall, Plaza Mayor, is accessible by dinghy via the canals. The downtown "fresh market" is also a popular place to buy fresh vegetables, fish, poultry, and beef. All items are laid out in the open air and unrefrigerated. Swatting flies away from your intended purchase does take a little getting used to though. More...

Top
Bob and Sue Franklin's Pipe Dream - July 2007
by Nancy Terrell
All At Sea Magazine
Bob Franklin, one of the most knowledgeable power boaters I have ever met, lived in Houston as a teenager and started sailing on the Gulf of Mexico from Galveston. Now in his 80s, he has spent most of his married life with wife Susan in boats, around boats, or messing with boats.

Bob met Susan, an Austrian/American, when she was in Madeira, Portugal, on a holiday. The two married in 1974 in Nevada and their boating adventures began. Susan attended Annapolis Sailing School and, after sailing the California coast with friends, the couple moved to the East Coast where they bought a 16’ Bayliner. In 1986 they moved to Florida and bought Pipe Dream 1, a 34’ SeaRay flybridge, on which they cruised the west coast of Florida.

The friendly couple is now based out of Bahia Redonda in Puerto la Cruz where Bob, known as “The Mayor,” says, “Like hundreds of expatriate cruisers, we love South America where we can travel by land or sea. We have enjoyed the ABCs, many of the Los Roques Islands, Margarita, Los Testigos, Blanquia and the Aves.”

Bob and Susan recently returned, by air, to Florida for medical check-ups. However, Pipe Dream IV is still at Bahia Redonda so we know they will show up any day now. I speak for everyone at the marina when I say, “Hurry back-we miss you.” More...

Webmaster's note: I'm sad to report that Susan passed away in her sleep in Florida. 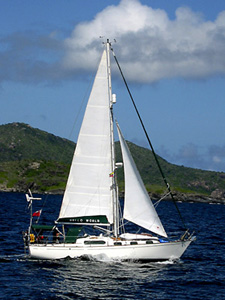 Hello World
Vancouver 34 Classic
We're off on a wonderful sail to Isla Cubagua. Just before we pulled the yankee, threading our way out through a fleet of local fishing boats, out into fabulous easterly winds, 15 to 20 knots on the beam, calm seas, beautiful clear blue skies and Hello World and her crew think they've died and gone straight to Heaven. Seven knots on the clock, full main, staysail and yankee all the way to our anchorage at Ensenada De Charagato on the north east corner of the island.

This is what you call living!

Cubagua is a strange island. For all the world like a big sandbank in the middle of the sea. But there's treasure in them thar sand dunes - or at least there used to be. Who knows, probably still is. More... 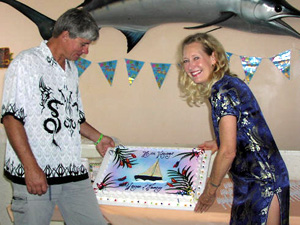 Wayne and Nancy with cake
We have always said cruising is waking up and deciding where we want to go. We are living proof of that statement! We stayed anchored off Margarita Island for a week and then anchored off the Island of Cubagua for the 1st night on our sail to Puerto La Cruz, Venezuela. Cubagua is famous for the pearls that were found offshore and enriched Spain's coffers back in the 1400's. We then sailed to Isla Chimana Segunda and spent another beautiful night anchored off in a bay enclosed by a tall peaked island. The islands off the northern shore of Venezuela are a beautiful contrast. Some of the islands are lush and green, while others are barren with only cactus plants.

We sailed into Bahia Redonda Marina in Puerto La Cruz enjoying many playful dolphins along the way, and set dock and mooring lines. We were greeted by a 4' iguana sunbathing on the dock. Many cruisers have been here for a year or more and there is a strong camaraderie among the cruisers. A group of 6 boats will be pulling out after Thanksgiving for the islands of Tortuga and Los Roques.

November 23 we sailed to Chumana to meet Jeannie and Bob on Island Dreamin' from Margarita. We anchored overnight and then buddy-boated back to Bahia Redonda. We joined many other cruisers in a Thanksgiving celebration at The Ancla Restaurant at the Marina for a traditional Thanksgiving dinner. What a wonderful way to celebrate all we have to be thankful for. More... 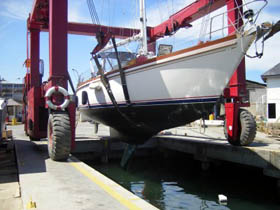 Dream Chaser getting splashed
The marina is very nice with secured gates and guarded 24/7. There are probably about 150 boats here from all over the world, but mainly Americans, Canadians, French and British boats of varying sizes but most all are cruisers, on tight budgets and sailing the high seas from England to the Caribbean to New Zealand and beyond. There is a boat here from Edina on our dock and another one from Alexandra, MN!

There are many shops and nice things within the complex at the marina; including 3 travel agents, a small boat shop outlet and paint shop, a doctor/dentist office, a mini mart, condos/apartments, copy/internet/phone services, a spa with yoga, massage and acupuncture therapy, two upholstery shops, a laundry service, a nice big pool, water aerobics, BBQ deck, and a restaurant. The docks are very nice with potable water and the brick sidewalks wind around and are lined with palm trees with white Christmas lights wrapped around the trunks. More...

Top
Ka'imi Sailing and Cruising Adventures - August 16, 2006
by Mike and Kim
on board s/v Ka'imi

Bird's eye view with a fish-eye lens
For now we thought we would show you some pictures of the Marina and the area we are in, Bahia Redonda Marina. There are several Marinas in the area, Bahia Redonda is the first one, right on the other side of the breakwater. It's the largest facility and has a capacity for 150 boats up to 100 ft. long. We have a swimming pool, a restaurant and bar, a little store, a laundry, marine stores and sail makers all on-site. Just outside the gate are local eating places where you can get fish and chicken. More... 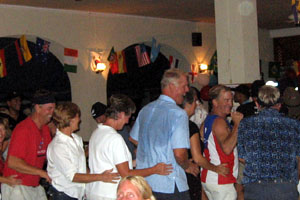