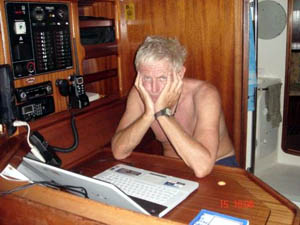 Cap'n Dicko at work
Cap'n Dicko preparing the weather forecast, he was the weather man 3 times a week and the net controller on Saturdays. His weather report was usually very concise 'the weather today will be the same as yesterday'.

This is definitely my last entry until, God willing, we get to Bonaire. It is going to be a dry run. Cap'n Dicko has loaded 5 litres of rum on board (about 5 days' worth), countless cartons of vino plonko, a bottle of gin, a bottle of vodka, tons of beer (for guests) and we are going to touch ne'er a drop! If we do succumb then I'm afraid it will have to be the end of cruising as we know it, we'll settle down in a lovely condiminium somewhere exotic and drink ourselves senseless. (Well, more senseless!) More...

Top
We Chose Puerto La Cruz - April, 2006
by Ellen Sanpere
Caribbean Compass
What a nice surprise! Your yacht insurance has been renewed and the premium is not much greater than last year - BUT - read the fine print! The Northern Tropical Storm Zone, in which the coverage for windstorm damage evaporates faster than a cruising kitty, may have changed. Markel American's popular Jackline Policy, for example, moved the Zone's southern boundary from 12°40' to 10°50' North latitude in the Caribbean, effectively shutting the door on many yachts in Grenada, Isla Margarita, the ABC Islands and Tobago. (Colombia is excluded at all times in this policy for other reasons.) If you plan to be in those areas, you can pay an extra premium for coverage, but how many yachties will love doing that? So where are you going to go?

Puerto La Cruz, Venezuela, at 10°13'N, 064°40'W, where cruisers have traditionally congregated for hurricane season in the Southern Caribbean, has much to offer besides a "legal" latitude. Comfortable marinas, secure boatyards, competent marine services, good restaurants, easy travel connections, a large cruising community, convenient provisioning, and cheap fuel all make PLC a logical refuge for the season. The favorable currency exchange rates allow even the most frugal cruiser to fix the boat and to have a good time, too, as everything seems less expensive. English-speaking cruisers monitor VHF Ch. 72, where the cruisers net broadcasts Monday through Saturday at 0745. Although mail and package service to Venezuela has a terrible reputation, trustworthy courier services are available. More...

Top
Tundra Travels - March, 2006
by Brian and Kathy Marsh
on board s/v Tundra 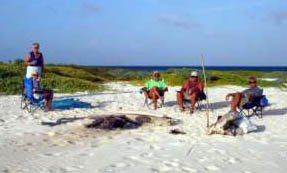 Dinner on Las Aves
March 10th marked our exit day from Gran Roque, so we dutifully returned to have our zarpe signed out. From there we headed west via Islas Noronsquis and Carenero and our time was up. Snorkeling and swimming are luxurious in these islands. The fishes are mostly protected and the largest of their species are in abundance. Coincidentally, in Carenero, we met Bill Reid of Sarnia origins. He's enjoying his lagoon catamaran and was heading for the mainland of Ve. On St Patrick's Day, reluctant to leave, we hauled anchor for Islas de Aves, the westernmost islands of Venezuela.

Aves de Barlovento ie windward is 37 miles west and famous for it's red footed booby bird. The mangrove atoll is an aviary of booby birds, pelicans and frigate birds. What a sight. The snorkeling was fabulous. We became waterlogged exploring reef after reef. With good trade winds we stayed in the shelter of the southern end. On the 20th of March we reluctantly sailed 30 some miles to Sotavento Isla ie leeward. I fish and fish and fish. Finally I catch a fish. Not one, but 3 barracuda! We decided to keep the one caught in deep water. It was firm and delicious-similar to our northern bass in flavour. Anchored securely behind Saki Saki island; minding our own business; cleaning our barracuda; we hear a beep, beep, beep. Lifting our sun shade who should appear, but the coast guard. Yes, the coast guard! Three young men wanted to board. Because we were rocking and rolling, it took myself and 2 of them to keep their boat off Tundra. Yes we have our zarpe and we're in transit. No problema. Their open pinero looked in such bad repair that it may sink any minute. Goodbye Venezuela! More...

Top
Heading East from the ABCs
and the Offshore Islands of Venezuela - February 2006
by Michael Rosner
Caribbean Compass
The offshore islands of Venezuela are a wonderful cruising ground for totally self-sufficient, well-found vessels. One should not expect to obtain fuel, water or provisions while visiting them as the majority of these islands normally lack year-round local residents. However, they do offer a brand of solitude difficult to find anywhere, and a large supply of pristine anchorages. Surrounding your boat will be some of the most thriving, diverse coral eco-systems within the Caribbean Sea.

Many of the sailors who visit these islands will eventually choose to return to destinations such as Puerto La Cruz, Margarita or the Lesser Antilles. I am offering these sailing directions as an alternative to heading east by island-hopping, as sailing conditions there are frequently more hostile than along the north coast of Venezuela and, as previously stated, few supplies can be found in these islands. After spending two months this year in the Aves the only fresh vegetables left aboard Panda were a head of cabbage and two beets! Last year we went as far west as the ABCs and had no difficulties reaching Puerto Cabello after first visiting Chichiravichi and Morrocoy National Park for minor provisioning.

You should have a copy of Chris Doyle and Jeff Fisher's Cruising Guide for Venezuela and Bonaire, as it contains the only harbor charts and city maps available for many of these stops. Most of the city maps are available on Doyle's website (Doyleguides.com), and can be downloaded and printed for free. More... 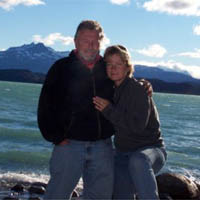 Glenn and Laura St. John
Here at Bahia Redonda, Puerto La Cruz, Venezuela our coordinates are 10° 12'27".12 North and 64° 39'42".51 West (Morning) I am sooo looking forward to doing long passages. I can hardly wait to slide into that zone, the rhythm that sailors feel. Its something I've not found in any other activity. Traveling long distances, slowly by boat is special like that. But you have to be brave. All kinds of fears lap like waves at the threshold of your mind. Fear of being alone with your thoughts, your wild imagination. Fear of equipment failure, navigation mistakes, storms and pirates. I know quite a few women who dread voyaging. They do it for their husbands, reluctantly. They are stuck in a bad habit of worrying. Its pitiful, limiting. What if...what if...what if? Yea? Well, then you just deal with it! I am not one to sit in the comfortable arm chair and watch the days scroll by.

So, I am thrilled to have this opportunity to go off-shore with my husband. Hour by hour, day after day...even weeks. Oh, the possibilities! What will happen? And afterwards, the feeling of accomplishment. What new chances will I get to learn? What incredible feat of nature or mankind will we encounter? Its not a matter of if kewl things will happen to us, but when and how! Webmaster's note: Sorry, the link is no longer working.

Top
The Race - October, 2005
by Mouridsen Joergen Christian
on board s/v Meridian

Meridian
Catana 431
After Bent & Kirsten's return to Denmark, our friend Pierre, the owner of the boatyard here at the Bahia Redonda Marina, completely unsolicited offered to repair the dent in the starboard bow, from the impact of the wood log, FREE!!!!!!!!!!!!! Not that it was a major repair or an expensive one either, but just very touching. The people of Venezuela are just very caring, warm and giving (Pierre is French though, but have lived here for 35 years). ONE CONDITION THOUGH! Pierre is the prime force behind the annual Bahia Redonda Classical Regatta 2005, "THE RACE", and I had to promise to sign up for the race.

Well, I had considered that regardless, so we had a deal. THE RACE took place over the weekend of October 14 - 15. Many take this regatta very seriously, soliciting top crew to crew on their boats. We got several request from "professional" crew, to crew on MERIDIAN. However, I declined all, declaring, that I had my crew! I felt, that we have sailed MERIDIAN for a year, - competently, so why would we need additional crew? We should bloody well be able to race her as well.

Sunday night there was a cocktail party with the awards ceremony. MERIDIAN won first place in our class! The Captain and his three girls were up to receive the trophy, Bolivares 2,150,000.00 (approx. $ 1,000.00) and five days free stay at the marina. WOW, I was a bit more than proud! WE had just proven to ourselves, that not only could we sail MERIDIAN around the Caribbean, but we could also race her competently as well! THIS WAS THE CAPTAINS REWARD! More...